Abstract:
The original student government of the State College for Teachers, founded in 1917. Myskania acted as a secret society which selected its own members, but its duties were gradually assumed by the Student Association and it was disbaned in 1979.
Extent:
1.42 cubic ft.
Language:
English .
Preferred citation:
Preferred citation for this material is as follows: and Identification of specific item, series, box, folder, Myskania Records, 1915-1984. M.E. Grenander Department of Special Collections and Archives, University Libraries, University at Albany, State University of New York (hereafter referred to as the Myskania Records).

Myskania survived as an organization from 1917-1979, but in 1946 Myskania declared itself defunct and burned all its records to demonstrate against its lack of power and to preserve the secrecy of the organization, especially the way in which its members were chosen. The meaning of "Myskania" remains a mystery that only its members know.

The original documents in this collection all stem from the period 1946-79. These records include minutes, announcements, decisions, proposals, tabulations of votes for membership, a membership list from 1917-70 and a history of the organization, written in 1984. The records from the time period of 1946-62 are not very extensive, since during this period Myskania's role had been severely limited.

In 1915 a petition was submitted to President Abraham Brubacher asking that a student government be organized. In April of 1917, a faculty committee appointed by Brubacher announced the decision to create a student council comprised of seniors. This council would take charge of student affairs and concerns. Soon after, the council adopted the name Myskania, the meaning of which has been kept secret.

Secrecy was to pervade most aspects of Myskania's early history. The organization was self-perpetuating, with senior members selecting their replacements from among the intellectual, moral, and civic leaders of the junior class. Prior to 1931, the student association chose three of its members, but after 1931 Myskania chose all of its own members.

Myskania's role was defined in section 11, article 11 of its constitution: "Myskania shall regulate all undergraduate activities, not academic in nature." These activities included the oversight of student publications, student entertainment, class constitutions, the time and manner of the election of class officers, the organization of the freshman class, and the protection of college traditions.

Myskania's early years saw an active assertion of its powers. In 1921, Myskania suggested the formation of the Student Association as the official student government and even wrote its constitution.

Myskania's eventual demise stemmed from the gradual assumption of its functions by the Student Association. By 1935, the Student Association decided that certain functions, such as the freshman-sophomore rivalries were an executive function, not a judicial one, and thus, Myskania lost one of its main functions. In 1946, due to the disappearance of its governmental powers and the hostility shown to its secret functions and rituals, Myskania announced its dissolution. Later that same year, former Myskania members burned its records and constitution. In 1946, former members of Myskania resurrected it as a volunteer group. It was declared a temporary judicial council in 1946. One year later, Myskania would rise again as an official organization. In 1963, Myskania was called upon to adjudicate the Cortland Case involving the commission of lewd acts by Albany students at a basketball tournament in Cortland, N.Y. Myskania issued summonses, placed some students on probation, and expelled another. This was the last vigorous act ever taken by Myskania. In 1964, one of Myskania's chief duties was taken away, the freshman-sophomore rivalries. Since 1946, Myskania had been allowed only to supervise the function, but now it was not to be involved at all. Under a revised constitution, Myskania's role was to act as guardian of the freshman class and of school tradition, and to screen appointments to the school judiciary. By 1968, the student newspaper was calling Myskania a useless organization that should be abolished. Despite this opposition, Myskania continued to function until 1979, when it appeared before the Student Association to justify its budget. Unable to define an adequate set of functions, Myskania was excluded from the budget. There were no elections to Myskania in 1980. Myskania's own creation, the Student Association, had taken all of Myskania's power, and was thus the main instrument of its dissolution.

All items in this manuscript group were donated to the University Libraries, M.E. Grenander Department of Special Collections and Archives.

The collection has no series. 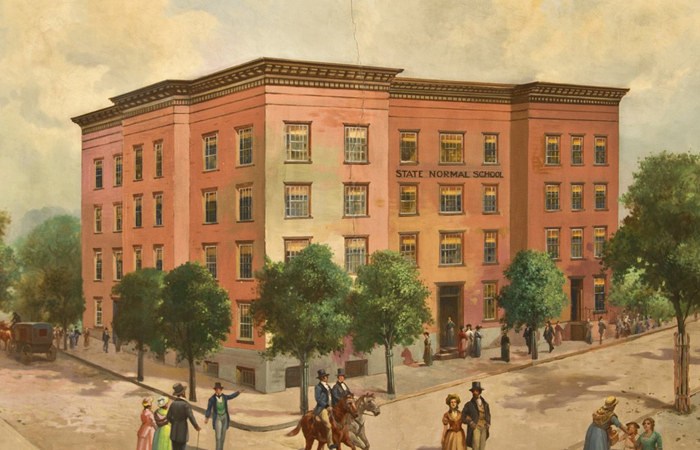