Looking back, I was most struck by how many executions in the American South had been left uncounted in the original dataset. The first state that I was assigned to create metadata for was Mississippi. While I do not have a background in the history of the death penalty, there was something that just seemed... off about the data. When I initially scanned through the execution IDs that were already in use from M. Watt Espy's dataset, I was surprised to see what I thought were relatively long gaps in the time between executions in the 19th century. Had the state really not put anyone to death between 1859 and 1875? Given the rate of executions in Mississippi during the early 20th century, this didn't seem all that likely. Had the Civil War and Reconstruction perhaps been a period of significantly lower crime rates or lenient sentences? 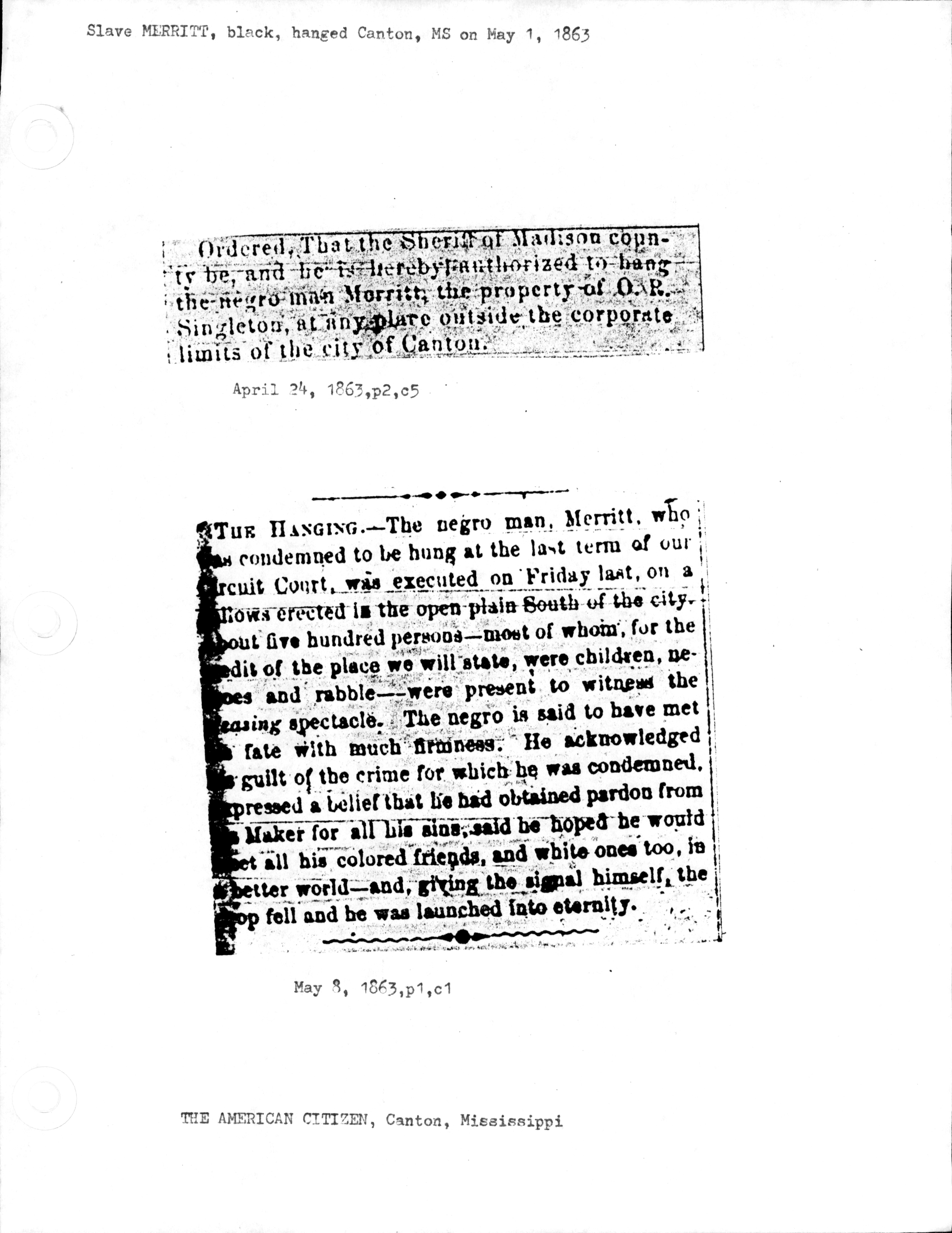 Newspaper clipping documenting the execution of Merrit, an enslaved man executed in 1863 who was not included in the original Espy File dataset.

Well, no. In fact, there were at least 88 executions in Mississippi during this time that had been left out of the original data. Once I started going through the alphabetical folders that Espy had maintained for the state, these "new" executions started to appear. Espy had certainly been made aware of these deaths, through both his own research and the work of others as well. For any number of reasons, they simply had not been integrated into the original dataset. They lurked below the surface, available only to those who had the time and resources to go through the files in person. 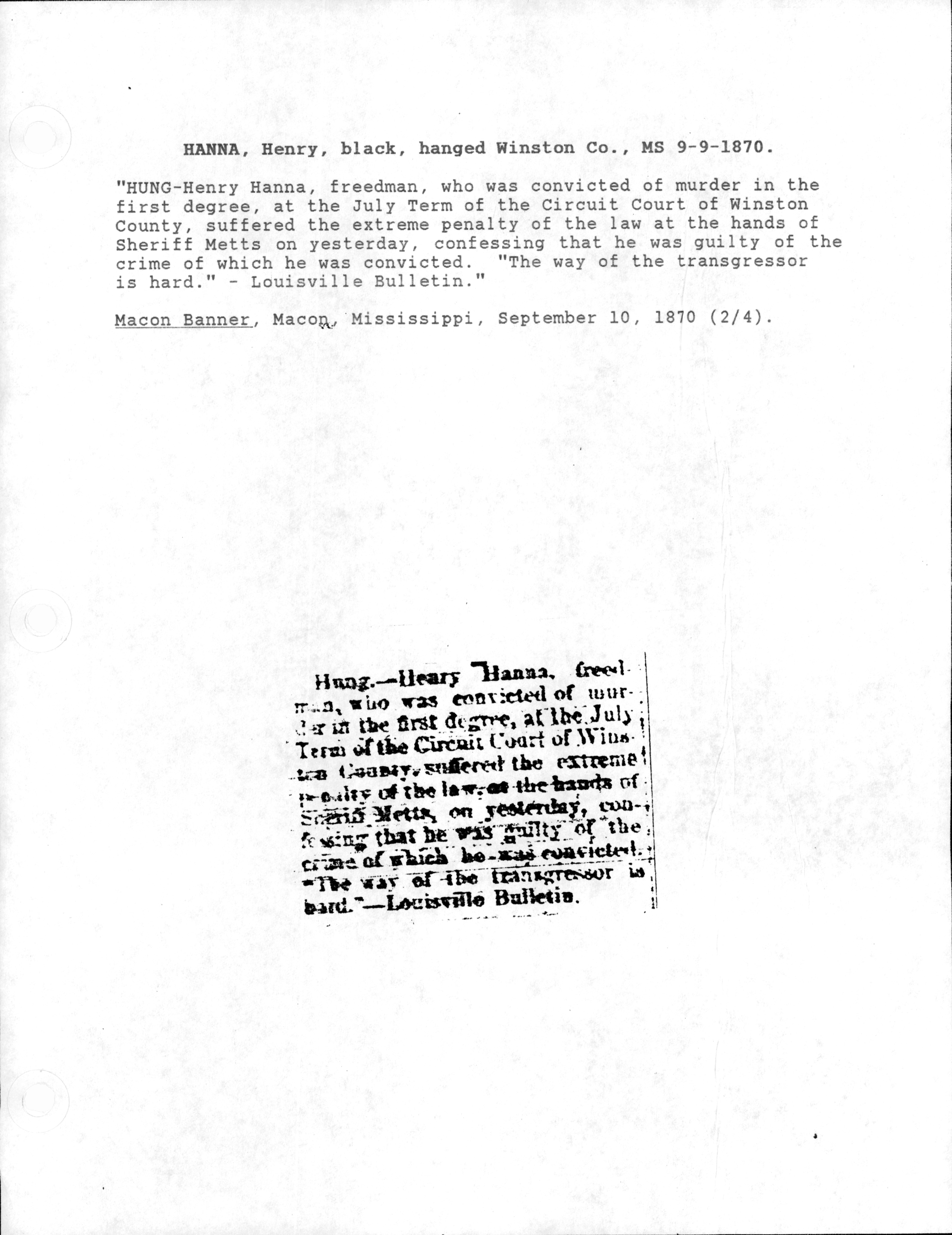 Newspaper clipping and note made by Watt Espy discussing the case of Henry Hanna, a freedman executed in 1870 who was not included in the original Espy File dataset.

That's to say nothing of the many more execution records culled from the Multiple States folders. Many of these records came from the voluminous lists that Espy maintained. All of us responsible for metadata creation came to know Espy's habit of keeping prodigious lists of the executed, often annotated with his updates from further research or snippy editorial comments. Generally speaking, the files in these multi-state folders provided far less information on the executed than the state-specific folders. Oftentimes they included little more than a date and location along with the name of the executed. Sometimes, particularly when the person executed was enslaved, a name was not even available. Yet these lists confirmed many more executions than had been originally listed. 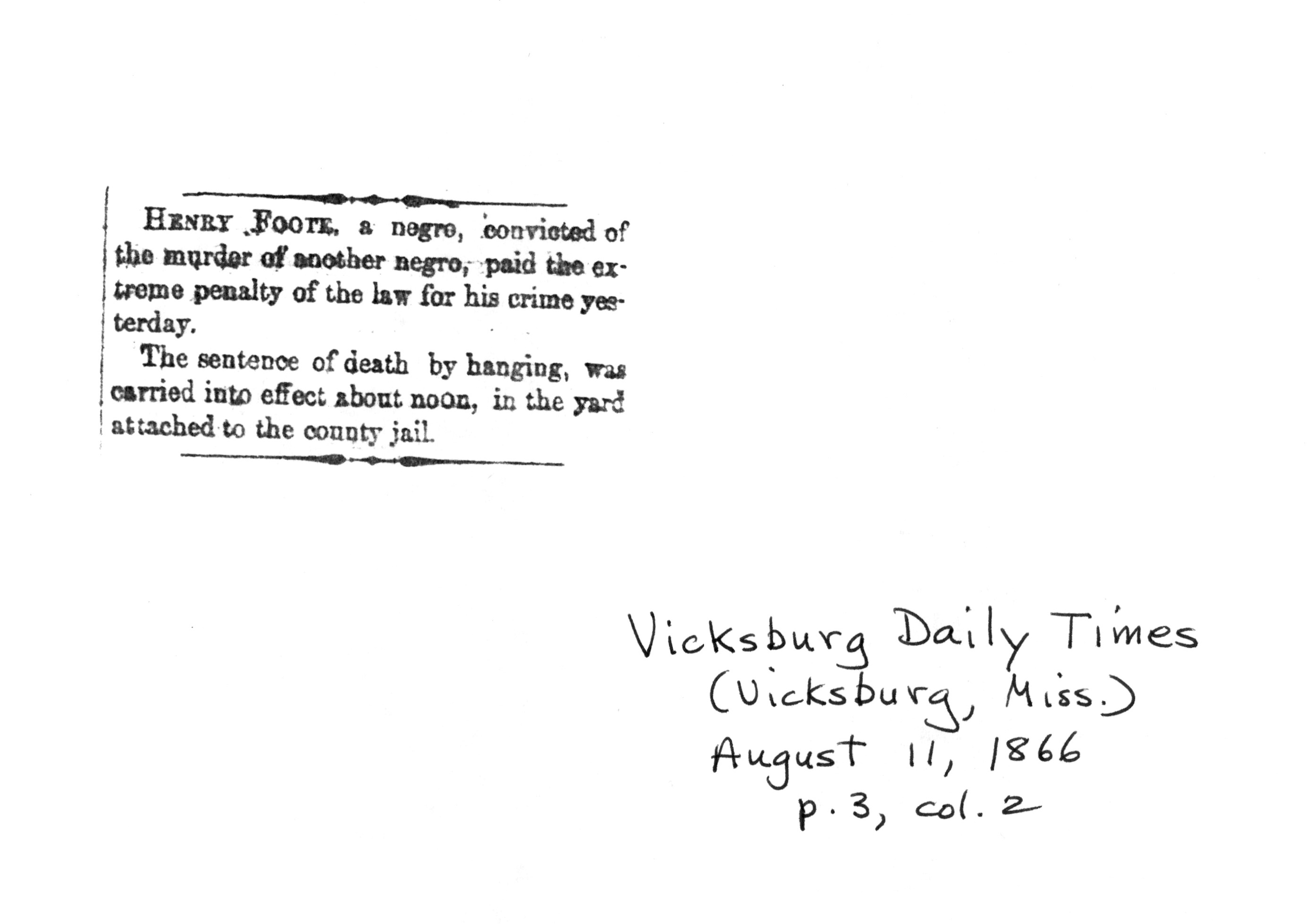 Newspaper clipping documenting the execution of Henry Foote in 1866. Foote was not included in the original Espy File dataset.

Sourced note written by Watt Espy discussing the case of Green Dorrah, a freedman employed as a "body-servant" on a plantation who was likely executed in 1871 and was not included in the original Espy File dataset.

But why had so many executions been under-documented? There are probably a number of factors at play here. First and foremost, the Civil War and Reconstruction certainly shaped local record-keeping procedures in ways that are still being reckoned with. Newspapers in Mississippi were of course still published during that era, but Espy seems to have relied on them less. Whether newspapers from this time stopped providing the kind of execution data that he needed or whether those newspapers weren't preserved is less clear. It seemed as though more of his execution records came from papers outside of the state and from other types of sources entirely. County histories and court documents played a prominent role in providing coverage to this area as well. 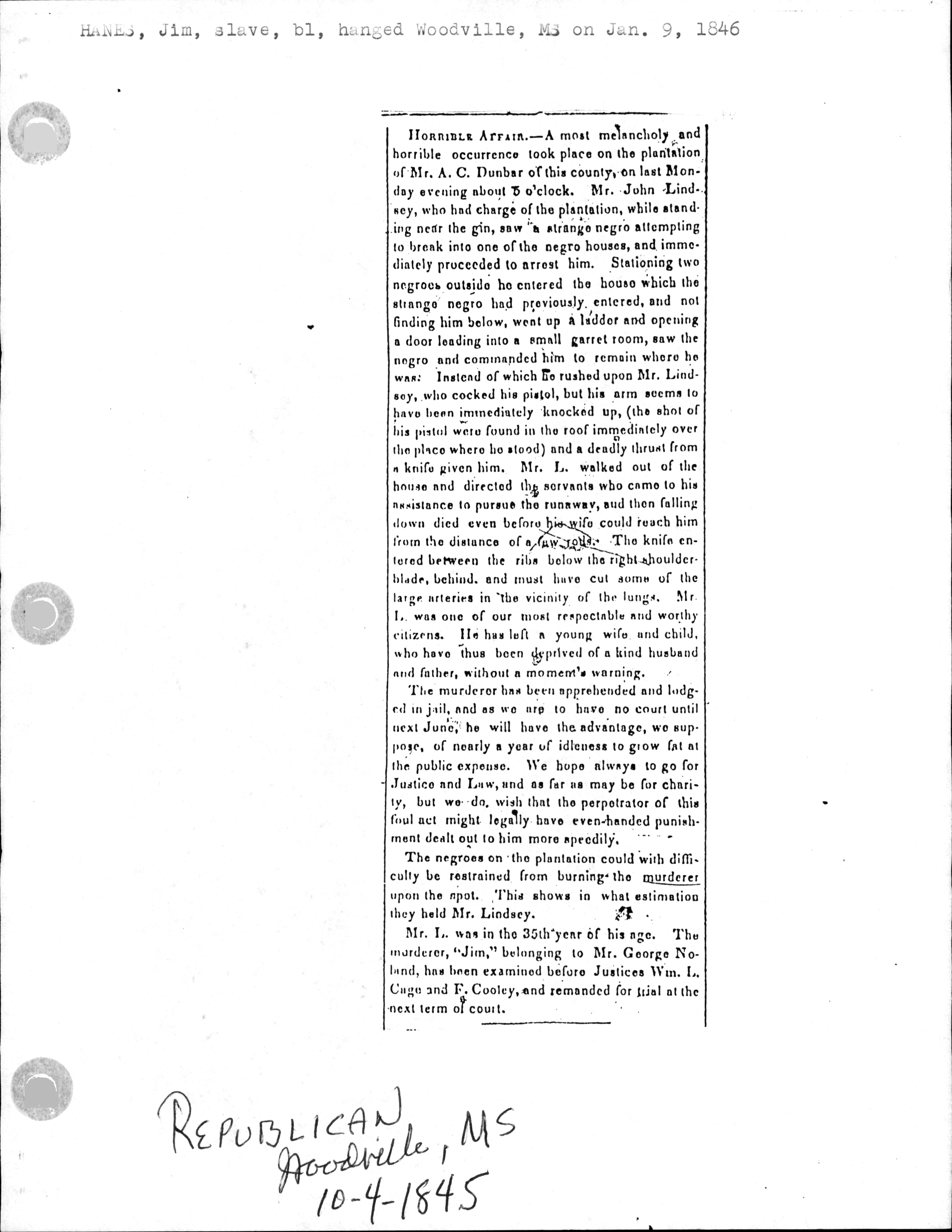 Newspaper clipping discussing the 1845 execution of Jim Hanes, an enslaved man. Hanes was not included in the original Espy File dataset.

It's possible too that executions were not reported on as regularly during this period. Espy often printed copies of newspaper articles on executions, though there seemed to be less of those for the southern states I worked on during the Civil War and immediately after. With war and death a part of everyday life, perhaps newspapers were less inclined to devote precious column space to the workaday state-sponsored killings away from the front lines. In the end too, Espy's lists weren't fully integrated into state files. Many executions simply weren't filed as they could have or should have been.