This collection contains materials from the Milne School related to administrative activities from faculty and staff, as well as records pertaining to student activities from various clubs and publications.

History of The Milne School

The campus laboratory school dates from 1845, when the teacher training primary school was formed. This program was known as the Experimental School until 1867, when it became the Model School of the Albany Normal School. The mission of the experimental school was to provide a convenient location for practice teaching.

In 1890, the State Normal College created a high school teacher practice program which was named the Milne School in 1914, after William J. Milne, the late college president. Dr. Milne had been requested, in 1889, to prepare an overview reorganization plan for the Normal School, and to include a high grade (high school level) professional school. Thus Dr. Milne is considered to be the Father of the high school.

The Milne School was somewhat unique because of its dual purpose as both a high school education program and also as a teacher training environment for college students. The school continued to operate normally for many years, until it came under scrutiny by the state government for who investigated the institution for a lack of diversity in the school. It was discovered that many students were chosen merely because they had other family members who had attended in the past, or were currently enrolled at the Milne School. It was after this investigation that the school began to become more diverse racially.

The school closed its doors in June 1977, after extensive debate on the purpose and merit of the program and because of the economic cut-backs in the State University system in the 1970s. Alumni of the school continued to remain active, with many reunions held, and attended by former student s and faculty. In some instances there have been school-wide reunions attended by all class years.

There is very little information on the early years of Milne, partly due to the Willett Street fire of 1905. Most of the earliest records were burned or damaged. Confidential Regents reports date from 1907, and commencement programs date from 1893. Most of the records begin in the late thirties and early forties.

For researchers interested in general background on the Milne School, the history and profile files in the general series may be useful. Information on Milne Hall can be found in files on proposals for a new building in 1949, and within the library frieze and mural plan files dating from 1932. Further information can be found in the University film Library, and by researching the Alumni campus in other Special Collections files.

Data on the student teaching program or the school curriculum can be found in the general reference files under teacher training, student teaching, methods participation, and curriculum. Master Plan 1972 and Methods Participation 1972 include descriptions of Milne's relationship with SUNYA, and justification and objectives for the student teaching program. Also, historic references to the methods program are noted within the committee reports on assessing the effectiveness of teacher training, such as the Teacher Education Committee file of 1958-1969.

There are many reorganization programs within the general files and the closing of Milne series. Note the Five year plan of 1946, and the Future of Milne Committee file of 1952-1967. Another file of interest is the Readjustment of High School Education in 1951.

Reorganization plans and committees peak in the late Sixties and Seventies with several files on the function and role of laboratory schools (C.U.L.S. background dates from 1947). The Fiser report, which evaluates Milne from 1967-1970, the Fretwell recommendations, the N.C.A.T.E. Evaluation of Milne in 1970, and the Three Year Plan of 1972 are useful files. Workshop and symposia files as well as faculty meeting agendas and minutes also present important issues on the present and future of Milne. Follow up studies on students are found in the general file under both class of..., and under follow up studies.

Information on the 1950's lawsuit that forced the integration of the Milne School will not be found within these files. Suits on accident liabilities are in the general files however. Other records of general interest include the scrapbooks which date from 1909, notebooks, yearbooks, newspapers and other student publications.

This lists only items that are available online. To see all materials, visit The Milne School Collection Page. 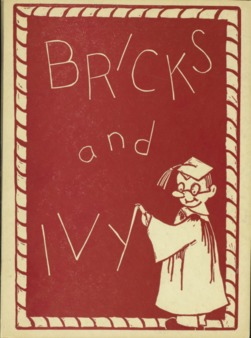 Series is made up of the Milne School Yearbook, known as "Bricks and Ivy." 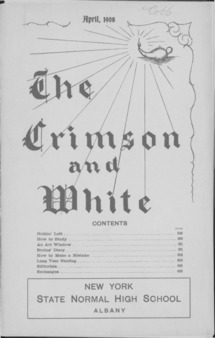 Crimson and White Yearbooks and Newspapers

Series contains the run of Crimson and White from 1904-1972, as well as the Senior and Junior New... 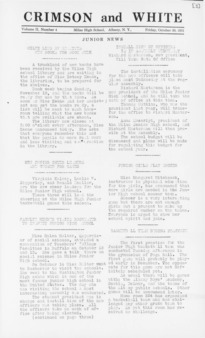 Series is made up of the Crimson and White: Junior Newspaper dating from 1931-1941. 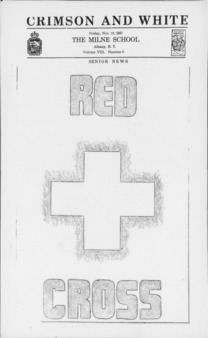 Series is made up of copies of the Crimson and White senior Newspaper dating fro 1931-1941. 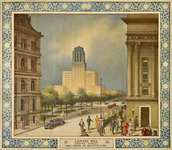 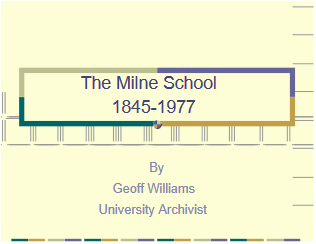 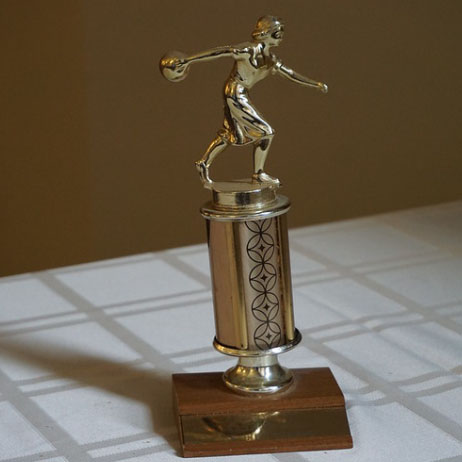 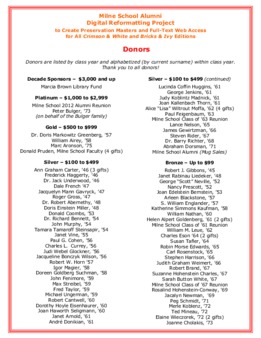